One source of electrical energy comes from fossil fuels, but the availability of fossil fuels is dwindling every year. This is of course inversely proportional to the increasing number of community needs. A water turbine is a device that can convert the energy of water into motion energy which will generate electricity. The crossflow turbine is an example of a water turbine. However, the power produced by the crossflow turbine tends to be low, so it is necessary to develop a crossflow turbine. The purpose of this study was to determine the turbine blade angle which has the most optimal power and efficiency. This research uses an experimental method by varying the bulkhead angle on the semicircular cross-sectional blade on the horizontal axis crossflow reaction turbine. The turbine bulkhead angles used are 60°, 75°, and 90° which were tested with variations in water capacity of 9.572 L/s, 11.024 L/s, 14,322 L/s, 16,152 L/s, and 18,113 L/s. While the variation of loading is 500 grams, 1000 grams, 1500 grams, and so on until the turbine stops rotating. The results of this study found that the turbine with a bulkhead angle of 75˚ has the highest power compared to a bulkhead angle of 60˚ and a bulkhead angle of 90˚. The highest power is produced at a capacity of 18,113 L/s, with a turbine power of 4.194 Watts at a loading of 12000 grams. The highest efficiency is also produced at a bulkhead angle of 75˚ at a capacity of 11.024 L/s, with an efficiency value of 88.29% at a loading of 4500 grams. This is because the 75˚ bulkhead angle is able to utilize the water flow well on the inside of the turbine blade angle so that it produces a large thrust and is able to rotate the turbine with high rpm and large torque. 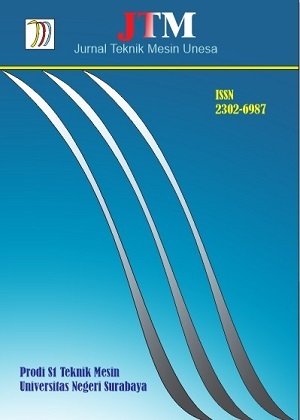