Constitutional Court Decision Number 012 / PUU-I / 2003 Concerning Reviewing Law Number 13 Year 2003 Concerning Manpower Against the 1945 Constitution of the Republic of Indonesia. Based on the Constitutional Court decision, there are two differences in the Supreme Court's decision, namely the Supreme Court decision. 900 K / Pdt.Sus-PHI / 2016 and the Supreme Court's decision Number 1050 K / Pdt.Sus-PHI / 2018 which both handled cases of termination of employment due to serious mistakes. This study aims, to determine judicial practices related to workers who commit serious mistakes who have been terminated before a criminal court decision is made and to identify and analyze ideally the judge's decision in terminating employment due to serious mistakes. The research method used is normative legal research by collecting legal materials as well as non-legal materials to analyze the problems under study. The results of the research that have been carried out, then there are two conclusions; first, that termination of employment due to serious mistakes can be made after a criminal decision is legally binding in accordance with the decision of the Constitutional Court Number 012 / PUU-I / 2003 concerning Judicial Review of Law Number 13 of 2003 concerning Labor Against the Constitution of the State The Republic of Indonesia in 1945, whose ruling stated that it was invalid and had no binding legal force, so that the Constitutional Court's decision was equivalent to a Law because it was announced in the State Gazette in accordance with Law Number 12 of 2011 concerning the Formation of Legislative Regulations as already amended in Law Number 15 of 2019. Second, with the existence of a criminal decision that has legal force it can still be used as a basis by a judge to terminate work relations because it fulfills the principle of the presumption of innocence and guarantees human rights for workers to prove it in the case process. 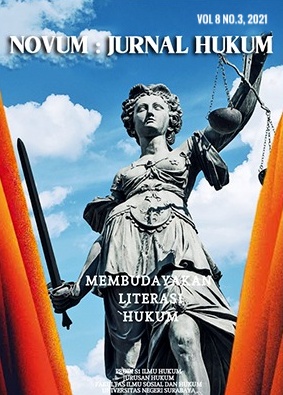 This work is licensed under a Creative Commons Attribution-NonCommercial-ShareAlike 4.0 International License.

Authors who publish this journal agree to the following terms: